Traveling with little ones can be extremely stressful and overwhelming. For adults, going back to the hotel room after some exploration is quite enjoyable, it id so much easier for us to kick back and relax. Unfortunately, this is not the same for children. Their minds are constantly on the go, as are their little bodies. Constantly learning and being curious. So, when you need some down-time in the hotel room in-between activities, you need to make sure you’re prepared to keep the little ones entertained. Here are a few tips to helping keep the kiddos busy while you’re relaxing in the room:

Puzzles, legos and anything that involves them staying engaged for longer than five minutes will be a saving grace for you. Help get them started and throw out ideas of what to build with their legos or get their puzzle started for them. Kids have wild imaginations and toys that keep their attention help them to express those imaginations.

We live in an amazing and instantly gratifying world filled with wonderful devices. As parents, we are grateful for this technological age. Put a movie on the laptop or let them play games on the phone or ipad. This will help keep them occupied for a few while you relax. 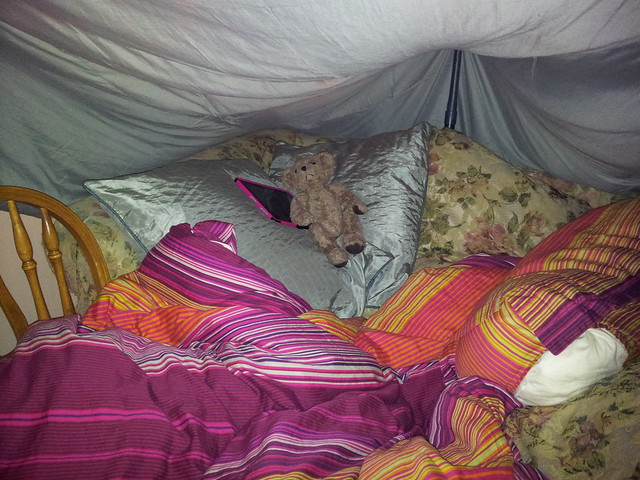 Along with the technology… Help them build a blanket fort and put a movie on the laptop inside, and BOOM! Naptime.

If all else fails, know that if your hotel has a pool, your kids WILL get worn out. Go enjoy a dip in the pool or relax in the Jacuzzi while you let them jump, swim and splash their way to exhaustion.

Visiting the southern part of Utah is just like a time warp- all this is due to the formation of prehistoric rocks at the five amazing national parks. The five gorgeous national parks are all packed in 650 miles of the high desert. Most popular are Zion and Bryce Canyon and also the Arches National Park sandstone bridges. Canyonlands is not popular, Capitol Reef as well as the impressive Grand Canyon. 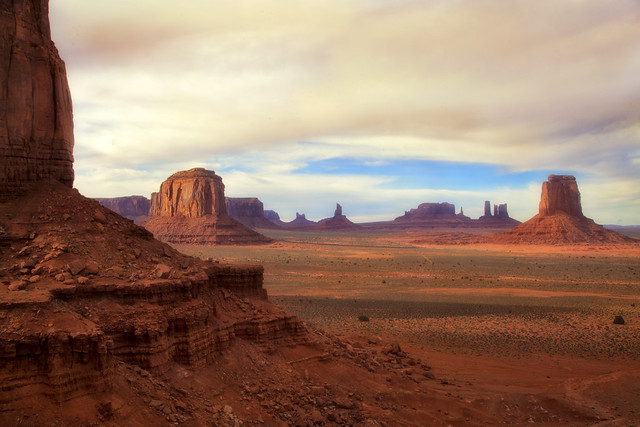 It was surely ambitious to attempt vising all the five parks in four days’ time. Keep in mind that my friend Stew and I managed that at the most chilly part of spring partly beating the crowds. However, over the years, we’ve together climbed mountains. We have also travelled through the eastern Cuba’s hinterlands. Moreover, we have taken a Boy Scouts troop to Europe on a tour that lasted three weeks. This proves that we are not resistant to any challenge.

We finally arrived to Moab in less than one and a half hours after we landed at Colo’s Grand Junction. Wedged between Canyonlands and Arches, Utah is a laid back city. At Moab’s north, we had booked a mountain back ride leading to the desert’s panorama from the north end of the Arches National Park. We had to grind 700 feet vertically up of the slippery rock.

We met Goose our guide from Rim Tours. He told us that nine years ago, he had left his Ohio home to come in Colorado and Utah to offer biking and rafting trips. Without any shocks, Goose made a ride of one gear without shocks. Stew and I were on advanced mountain bikes with full suspension and fast shifting. Just five minutes into the biking, I became breathless pushing my gelatin legs to force myself up a four miles long ridge. The dinosaur prints became of great help. Every 50 yards, the three-toed impressions appeared, each surrounding by stones to keep people away. Riding down was quite easy.

As we drove to the famous southern end of the Arches, we found families viewing the geological formations like the Double Arch and Balanced Rock. In the late afternoon, we were ready to embark on a ¾ mile hike up to viewing the Delicate Arch. 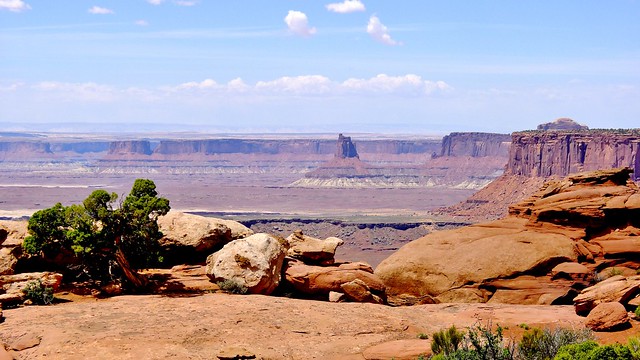 At 527 square miles, Canyonlands is one of the biggest national parks that is divided into three. Decorating the grounds were the pygmy juniper trees and sandstone layers fanned into phyllo like sheets.

For lunch we made a stop- over at Twin Rocks Café in Bluff’s one Road Town. The crispy and wonderfully greasy bread accompanied with barbecued pork ribs were not only huge but quite satisfying. Upon passing the Mexican Hat, we finally arrived at Navajoland which is a native reservation in America sprawling across northern Arizona and Utah.

Capital Reef’s gateway is located in Torrey, one of the least well known national parks in Utah. Threading a high carved valley is route 24 across the little Fremont River. Taking the 10 mile Scenic drive led us to the dry canyon which later forms a river following heavy rains. On both sides, the walls rise several hundreds of feet as dirt makes its way through the narrow canyon.

Through Dixie National Forest, we wound to the south from Torrey across Dixie’s National Forest. It earns my vote for the nation’s most remarkable drive. At the time of reaching the summit, the road cut through a forest of tall firs and snow drifts of eight foot height. Snow can stay through end of spring at the highest points. Below it is a span of yellow and red mesas.We now raced to get to Bryce Canyon to catch up with the light of sunset up the hoodoos. The scene has got spindly, orange and white stripes of rock spires.